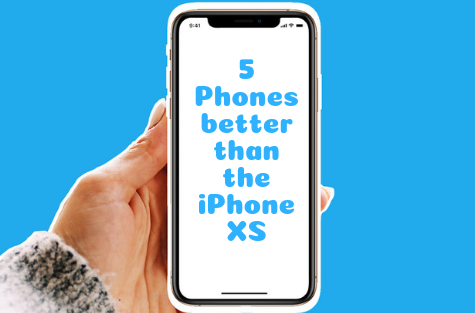 Every year, it’s the same old thing. Apple launches an ‘innovative’ smartphone that has fanatics camping outside their stores before the launch. For example, the hype created about the iPhone XS, XS Max and XR is something we’ve seen every season. But what if I told you that there are plenty of phones better than the iPhone XS that will offer you much more than what Apple offers. Here is a list of the top 5 alternatives to iPhone XS series (even better)

The Samsung Galaxy Note 9 is Samsung’s finest creation. And compared to the iPhone, this phone is far superior. The Note 9 is a powerhouse that has it all. From the S-Pen that offers versatility, an AMOLED display, an option to increase the storage exponentially, as well as an inter-cooling system. Both the mobile phones fall in the same price bracket, but if money was no object for me, I would go for the Note 9.

OnePlus series might not be everyone’s cuppa tea, but the OnePlus 6 indeed gives a bold statement. Costing half the price of the iPhone XS Max, the OnePlus 6 mobile phone has a better CPU (octa-core) as well as a better battery (3300mAH) against its Apple counterpart. The display is much better than the iPhone XS as well, OnePlus 6 has an Optic AMOLED screen against iPhone XS’ OLED. Now, considering a phone that costs half the price of an iPhone XS, and makes the headline, surely is worth a gander.

According to many reports, Apple’s cameras have been shown-down by manufacturers like Google, Samsung & Huawei. Huawei P20 Pro is a titan of the Android realm that is not only beating the iPhone XS Max in the RAM game, but also in the camera potential. P20’s triple lens primary camera; 40-megapixel color, 20-megapixel monochrome camera & an 8-megapixel lens supporting 3x zoom, offers a professional photography experience. The low-light and the night-mode settings are also much better, offering an ISO of 102,400. Huawei’s battery also works longer than Apple. Maybe that’s why Huawei trolled Apple fans by handing out power-banks.

Whether it’s the XS or the XS Max, Samsung will always give you a reason to rethink your preferences. Introducing the Samsung Galaxy S9 and the S9+, both sporting a better pixel per inch than the Apple rivals, both have the options of memory expansion that is absent in the Apple iPhones, and both the phone series are tied in their processing capabilities. Now imagine a phone released in the early 2018 meeting the standards of the phone released by Apple in late 2018, that says a lot!

So, it turns out that the iPhone XS isn’t really much different from the predecessor iPhone X. The Apple iPhone X phone’s the same size, it has the same hexa-core processing capability. iPhone X has a 3GB RAM compared to the XS’ 4GB. There are a few areas where XS has an advantage, like the A12 Chipset and a M12 co-processor compared to X’s A11 Chipset and M11 processor. The battery test done on the X, XS and XS Max shows that the new iPhones have a lesser battery life compared to the X despite Apple claims that iPhone XS “Lasts up to 30 minutes longer than iPhone X”. So, before you decide on splurge money on the XS, consider the X too.

This sums up my list of the top alternates for the XS series. It’s not that the XS series has done me any harm, but when there are better options readily available that won’t cost me my kidney, you would consider them as possibilities, right?