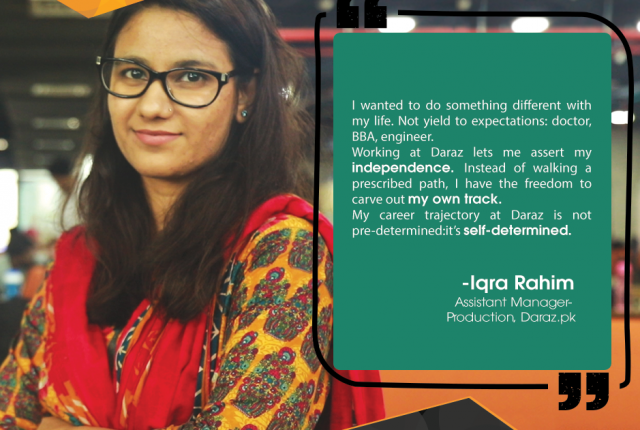 This ‘bad cop‘ began in data entry and now leads a team of 50 in Production. The floor is hers. So is the future.

Doctor. BA. Engineering. Iqra Rahim could have tread the path of least resistance to career stability but she chose, in her words, ‘to do something else.’ That ‘else’ led her to Daraz back in 2014 when she was still in college. Iqra did not want to cut along the dotted lines. She sought a challenge. She did not want to hew herself or her career path to societal expectations.

At just 24, Iqra’s progress is beyond her years. When she started her Chartered Accountancy course, she thought entering the finance/corporate world and pursuing a career as an auditor was a foregone conclusion. ‘I wasn’t really feeling it, though. I was studying day in day out and wanted real-world experience. Turns out CA wasn’t my calling.’’ That’s how Iqra’s CV reached Daraz.

John Lennon famously said ‘life is what happens to you when you’re busy making other plans’, and this seems to hold true for many of Daraz’s employees, Iqra included.

And so Daraz happened. Iqra secured an entry level job in data entry while she was still enrolled in her Accounting and Finance degree. 3 months in, she moved up to the Production department as a Content and Quality Control Analyst. By the age of 23, she was managing up to to 22 people as Team Lead QC and Content.

Accommodating bosses meant Iqra was able to complete her degree while honoring her commitments at Daraz. She has climbed up the company entering at resource-level, working up to team lead and now leading in a managerial capacity with upwards of 50 employees reporting to her.

So what kind of a boss is she? Not one interested in being in people’s good books, that’s for sure. Iqra isn’t a people-appeaser. She is keenly focused on one thing and one thing alone: getting the job done. If this means having to take on the role of the ‘bad cop’ on occasion, so be it. It comes with the territory of being a leader; especially this early on in one’s career.

I ask Iqra where she sees herself in the next 5 years. She chooses not to answer this question. And that’s likely because she has her gaze, and her focus, trained on the tasks that lie ahead. If there’s a take-away from Iqra’s career path, it is that it is best not to get too caught up in long-term plans. Plans can organize your life, but they can also fast turn oppressive when you’re expected to stick by them to the tee, without room for deviation, diversion and improvisational freedom. In skipping this question Iqra Rahim might ironically have answered it. Where ever she’ll be, and whatever she’ll be doing, in 5 years, Iqra will be right where she wants to be, where she needs to be, on her own terms.

This alone will suffice.

Join us in celebrating Iqra’s progress and her refusal to tread the beaten path!